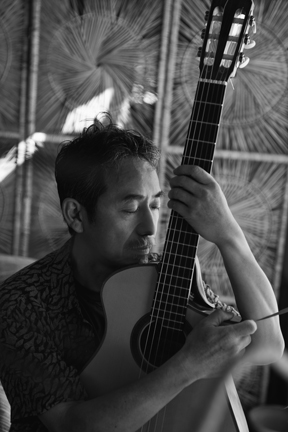 Nori Tachibana was born in 1954 in Tokyo, the second son of Kenichi and Tsuneyo Tachibana. Their family lived in the lively Setagawa-ward of the Chitose-Karasuyama district, and it is here that Nori first picked up his brother Junya’s guitar at age 8, which marked the beginning of his life-long fascination and dedication to music.

During his second grade of middle school, Norihiko’s family relocated to Sasebo city, Nagasaki, where he graduated from North Sasebo High School.

Norihiko was strongly influenced by rock music and the culture surrounding it, such as Woodstock. He formed a rock band with his classmates and performed songs by legends such as Crosby Stills and Nash, Led Zeppelin, Pink Floyd and Grand Funk at school festivals, but while this was fun, Norihiko’s heart was more drawn a softer acoustic sound. Norihiko stayed involved in music at Fukuoka University of Education, putting on many dance parties and playing at college festivals. Then, during his forth year, his band took on a first-year students as the new lead vocalist- her name was Kayoko.

Norihiko and Kayoko soon began composing music together and in 1979, with their band, Kaja, won the “Best song award” at the Yamaha Popular Song Contest, and then performed at the World Popular Song Festival in Tokyo in 1980. In 1981, Kaja professionally debuted two singles albums, before the band separated. In 1982, Kayoko and Norihiko got married, and he began working as a event planner at Dentsu Prox Inc. Kayoko gave birth to their only child, Misao, in Tokyo in 1987.

Norihiko courageously moved his family to New York in 1989 before settling in San Francisco in 1992. After a few unfulfilling jobs, Norihiko and Kayoko followed their artistic passion and started a jewelry business called “Kayoko Designs.” Over the next decade, although his time was largely consumed raising Misao and building their jewelry business. Norihiko always found great comfort playing the acoustic guitar. He diligently continued composing, and eventually recorded his own music, releasing “Pathway in My Dream” in 2002, “Coming Home” in 2006, and “Gift of April” in 2010.

Norihiko will be remembered as artist and musician, who soothed the ears and heart of his many listeners. Most of all, he was a dedicated husband and father, who proudly built a new life in a foreign country, and watched Misao graduate from UC Davis and then spend a year with their family in Japan.

In his last years, he fully dedicated himself to his passion for music, and even shared the stage with his wife and daughter while on his last visit to Japan. Amidst his enthusiastic recording of his forth CD his soul departed on May 21st, 2015 while sleeping in the comfort of his home in El Cerrito, California.